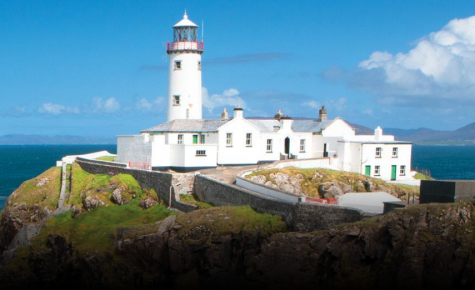 The Headlands of Ireland

Captivating nature, centuries of enthralling history and an abundance of rural charm – the headlands of Ireland have so much to offer those lucky enough to visit. Join us on this immersive tour and experience local hospitality, intriguing legends and long-standing traditions – from Dublin to the coast and back again. 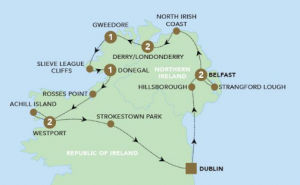 After meeting the group in Dublin’s fair city, we’ll board the mini-coach and set a course for our very first stop: the grand Hillsborough Castle and Gardens (Her Majesty The Queen’s official Northern Irish residence). We’ll have the chance to wander the estate’s magnificent rooms on a guided tour before we move on to the Hilden Brewery – the oldest independent brewery in Ireland – this afternoon. Here, we’ll receive an insight into how the brewery’s craft beer is made on a guided tour, before having the chance to taste it for ourselves (bottoms up!). Belfast, Northern Ireland’s capital, will be our final stop of the day – and it’s here that we’ll tuck into a welcome dinner together. (D)

This morning, we’ll step out onto Belfast’s historic streets on a walking tour with a political twist. Guided by both Republican and Loyalist ex-political prisoners, we’ll hear stories from both sides of the wall – with the opportunity to explore both communities like a local. Then: a traditional Irish bread making demonstration awaits at a thatched barn on the shores of beautiful Strangford Lough – so prepare those knuckles for kneading! Baked souvenirs in tow, we’ll move on to the Echlinville Distillery – where we’ll be lucky enough to follow the production process from ground to glass on a guided tour (with included tasting, of course). We’ll finish our day back at the hotel in Belfast, where we’ll have some free time to relax. (B, L)

Day 3 – Belfast – North Irish Coast – Londonderry
Today it’s out of the city and onwards to the spectacular North Irish Coast – taking in the verdant Glens of Antrim along the way. Around mid-morning, we’ll arrive at Scullion Hurls – a family business that provides hurls to many top inter-county hurlers. We’ll be invited into the workshop for a craft demonstration before we continue our journey to the small village of Bushmills – stopping off at the famous Dark Hedges avenue of beech trees for a photo opportunity en-route. After some free time in the village, we’ll move on to our next captivating stop: the otherworldly Giant’s Causeway, with its intriguing interlocking basalt columns. We’ll have just enough time for an optional photo stop at the medieval Dunluce Castle before we round off the day at our hotel in Derry/Londonderry. (B, D)

Day 4 – Londonderry
Today we’ve a whole day to spend getting to know Derry/Londonderry a little bit better – starting with a morning tour of the 17th-century Derry Walls (and their murals). Did you know that Derry is the only remaining completely walled city in Ireland? After visiting the Museum of Free Derry, the city will be yours to explore as you please. From a variety of fascinating museums to the Dickensian-style Craft Village, you won’t be short of things to do! (B)

Day 5 – Londonderry – Gweedore
First stop: the Newmills Corn and Flax Mills, where we’ll be treated to a guided tour – with the chance to see one of the largest water wheels in Ireland (powered by the River Swilly) in action. Next, we’ll visit the beautiful Fanad Head Lighthouse – delving into its fascinating history and taking in panoramic views of the coast and beyond. This afternoon it’s back on the road, as we set our sights on the breath-taking wilderness of Glenveagh National Park. And this evening? We’ll come together for a delicious meal at our hotel. (B, D)

Day 6 – Gweedore – Slieve League Cliffs – Donegal Town
Today we’ll continue our journey to John Molloy Woollen Mills (the home of Aran fisherman sweaters and Donegal Tweed) – where a weaving demonstration will give us a unique insight into the processes behind Ireland’s traditional textiles. We’ll then stop off at Assaranca Waterfall before moving on to the folk village of Glencolumbkille – one of Ireland’s best ‘living history’ museums. After that, the afternoon will see us moving on to Donegal Town via the spectacular Slieve League cliffs. (B)

Day 7 – Donegal Town – Rosses Point – Westport
We couldn’t leave Donegal behind without visiting its magnificent castle. This morning we’ll learn more about the fortress’ history as we wander its rooms (which reflect the styles of its two previous owners). After a quick stop at Drumcliff Cemetery (the final resting place of W. B. Yeats), we’ll drive on to the quaint village of Rosses Point – where a local guide will show us the sights. After a pub lunch, it’s back on the road. We’ll continue our journey through the captivating Ballycroy National Park before rounding off the day in Westport. (B)

Day 8 – Westport – Achill Island – Westport
This morning we’ll say goodbye to the mainland and set a course for Achill Island – where we’ll immerse ourselves in history at a local farm, an abandoned village and Kildavnet Castle (the former home of Irish pirate Grace O’Malley). Next, a tour and tasting session is in store for us at the Mescan Brewery – where we’ll learn the fascinating story of how the brewery’s owners left their life as vets behind to focus on making beer. After that, you’ll have some free time to enjoy Westport your way before we come back together for tonight’s farewell dinner. (B, D)

Day 9 – Westport – Strokestown Park – Dublin
The last day of our tour has arrived – but fear not! There’s still plenty to see. This morning we’ll visit the Museum of Country Life before moving on to Strokestown Park – a historic property that houses the Irish National Famine Museum. Then: we’ll hit the road back to Dublin – taking in sweeping views of the surrounding countryside along the way. (B) 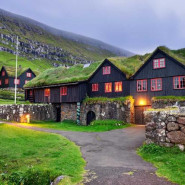 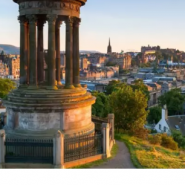 EVERY CORNER OF THE BRITISH ISLES IS COVERED ON THIS TRIP, INCLUDING BELFAST, DUBLIN, CARDIFF, EDINBURGH AND LONDON. No corner of the British Isles will remain unexplored, from London and Liverpool to Edinburgh, Dublin and Belfast, with a visit to … Continue reading → 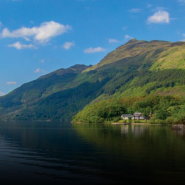 Enchanting lochs, haunting glens and soaring mountains: Scotland is home to many diverse treasures. On this tour of the historic Borders and scenic Central Belt, we’ll discover some of the country’s most spectacular views, fascinating stories and long-standing traditions – … Continue reading → 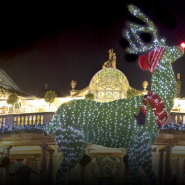 When it comes to wrapping up warm and enjoying the magical chill of Christmas, there’s nowhere quite like England – and on this seasonal tour of the country’s most festive attractions, we’ll find ourselves getting into the spirit of things … Continue reading → 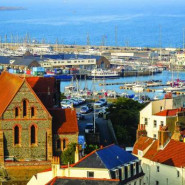 Go from Great British culture to Gallic charm on this trip from London to Paris, immersing yourself in the Channel Islands’ natural beauty and fascinating history along the way. Hear about Guernsey’s wartime occupation first-hand from the locals, enter a … Continue reading → 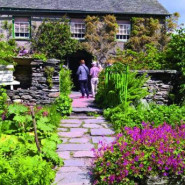 This adventure delves deep into Britain’s history and culture. In England, we’ll trace the footsteps of writers and poets, while in North Wales and Scotland, our journey takes in spectacular scenery and dramatic castles. Highlights Visit the Brontë Parsonage Museum, … Continue reading → 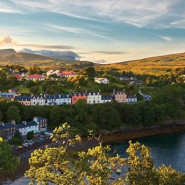 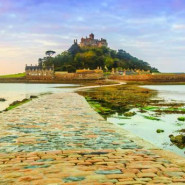 From windswept moors and wild coastlines to historic cities and picture-perfect fishing villages, the county of Cornwall is sure to impress. Discover the maritime heritage, rural beauty and culinary pride of South West England. Highlights Enjoy lunch at Rick Stein’s … Continue reading → 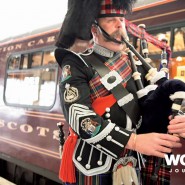 A journey on Belmond Royal Scotsman takes you straight to the heart of the Highlands, through landscapes of towering, pine-clad mountains reflected in mirror-still lochs. Just 40 guests travel through Scotland’s finest countryside in private cabins, with an open-deck observation … Continue reading → 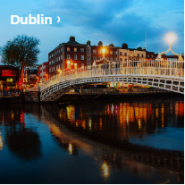 This Ireland tour—travelling from its east coast to its west coast—features Ireland’s most popular cities, small towns, and scenic highlights. Itinerary Day 1 – ARRIVE IN DUBLIN, IRELAND. Cead mile failte-a hundred-thousand welcomes! The day is free to relax in … Continue reading → 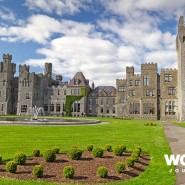 Let yourself be captivated by the charms of the Emerald Isle as you journey in peerless luxury.  The Belmond Grand Hibernian boasts accommodation for up to 40 guests in elegant, private en-suite cabins, while large windows let you admire the verdant … Continue reading → 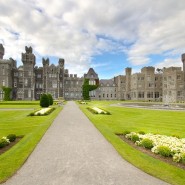 Board ‘The Isle of Innisfree’ across the shimmering Lough Corrib to 13th century Ashford Castle, once home to the famous Guinness family and the highlight of your iconic journey, which also includes visits to a deserted 12th century town in … Continue reading → 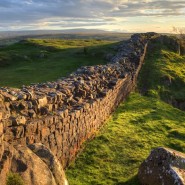 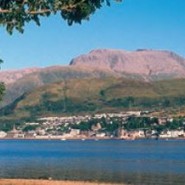 Experience the wild landscape of the south western Scottish Highlands on this famous 92 mile trail linking the lowlands with the highlands. Starting at the village of Drymen just outside Glasgow, it includes Loch Lomond, valley routes through the mountains … Continue reading → 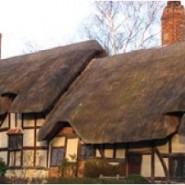 Take in the highlights of walking in the Cotswolds on this 5 day itinerary. The Cotswold landscape is an entrancing mixture of parkland, cultivated fields with dry-stone walls of Jurassic limestone and patches of unspoilt woodland. With almost all of … Continue reading → 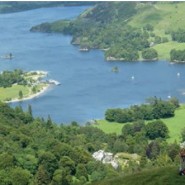 This is the quintessential English hill walking and long-distance trail experience. Travel across England on Wainwright’s Walk, one of the world’s greatest walks.  Walking from St Bees to Robin Hood’s Bay you’ll traverse the English Lake District, Pennines and North … Continue reading → 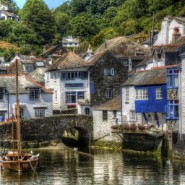 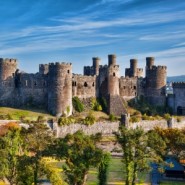 On this captivating journey through deep green valleys, past snow-dusted mountains and along an unforgettable coastline, we’ll go high and low in search of Wales’ most iconic sights. Join us as we walk the ancient lands of Celts and Romans, … Continue reading → 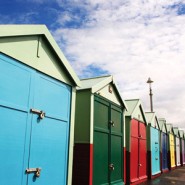 This Southern England tour highlights some of the historical monuments and beautiful towns found throughout Southern England. Itinerary Day 1:  Arrive in London, England Welcome to London!  Today is free for your enjoy at your leisure.  Day 2: London After … Continue reading → 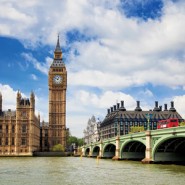 This exciting vacation is a delightful introduction to the history and culture of England, Scotland, and Wales. Itinerary Day 1:  Arrive in London, England Check into your hotel. In the afternoon, there’s time to rest or start exploring the lively … Continue reading →