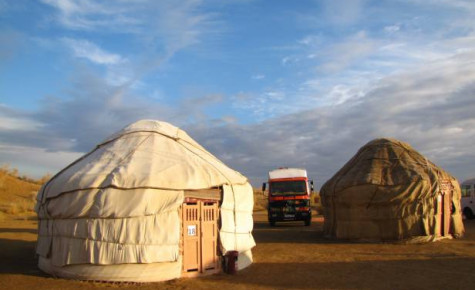 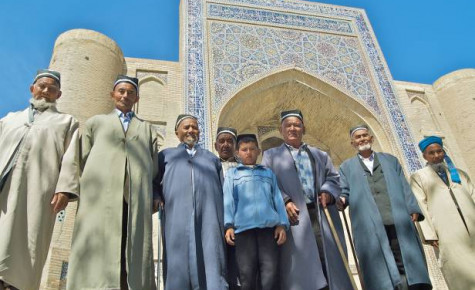 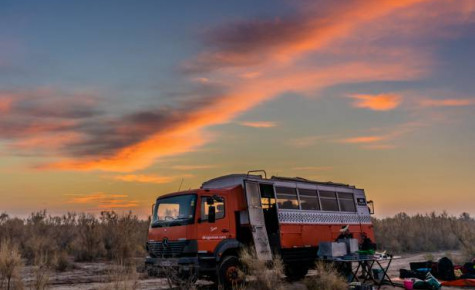 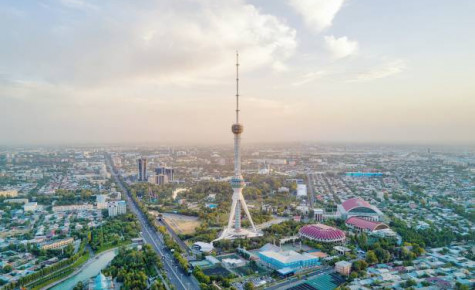 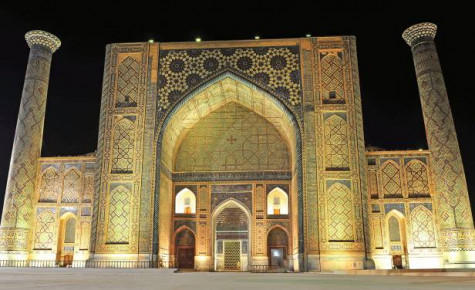 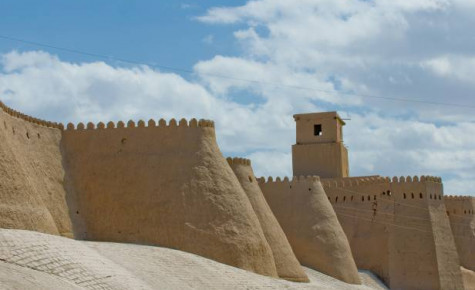 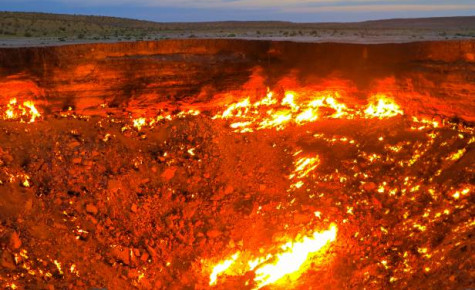 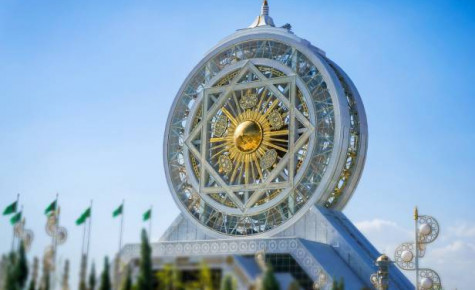 Discover the highlights of Turkmenistan and Uzbekistan on this 15 day overland adventure. See the flaming Darvaza Gas Crater, marvel at the ruined city of Kunye Urgench and enjoy a tour of the bizarre capital of Turkmenistan – Ashgabat. Visit the Silk Road cities of Khiva, Bukhara and Samarkand in Uzbekistan, stay in a traditional yurt in the Kyzylkhum Desert and end your journey in the Soviet-style metropolis of Tashkent.

Welcome to Turkmenistan! On arrival in Ashgabat there’s an included transfer from the airport to our hotel. Join a Welcome Meeting before we set off on a minibus tour of this off the beaten track capital city. Look out for the bizarre marble architecture and some of the golden statues of President Gurbanguly Berdimuhamedow. The president has a fascination with collecting world records and some of the more unusual architecture you may spot includes the world’s largest indoor Ferris wheel.

The crater was created by accident in 1971 when Soviet oil drillers released gas into the atmosphere, causing the ground to collapse. The Soviets then set fire to the gas to try and burn it all off. However, there was much more gas present than they realised and the crater has been burning away ever since. After we’ve admired the site, we find a suitable spot to camp for the night. (B, L, D)

Day 3 – Kunye Urgench
Today we drive into the remote Karakum Desert, visiting the ruins of Kunye Urgench towards the end of the day. Once an important Silk Road city, Kunye Urgench was spared by Genghis Khan during his invasion and the ruins remain well-preserved today. Admire highlights including the Kutlug-Timur Minaret, which is the highest minaret in Central Asia. Tonight, we camp in the desert close to the city. (B, L)

Days 4-5 – Khiva
Today we visit the vibrant market in the border town of Dashoguz before crossing into Uzbekistan. We continue to the beautiful Silk Road city of Khiva. On day 5 there’s a guided tour of the city to see highlights including the incredible city walls, the turquoise Kalta Minor Minaret and the blue palace of Tash Khovli. There are also included visits to the Mohammed Rakhim Khan Madrassa museum, the Kukhna Ark and Juma Mosque. (B x2)

Days 6-8 – Beautiful Bukhara
We have a long drive on day 6 to reach the beautiful city of Bukhara, our home for the next three nights. Enjoy a guided tour the next day, taking in highlights including the Ismail Samani Mausoleum, Kalon Mosque and Ark Fortress. You’ll also get to see the Kalyan Minaret. This beautiful tower hides a sinister past – it’s nickname of “Death Tower” has been earned due to its former use as a place of execution.

Day 8 is free to explore or join some of the optional excursions available. Perhaps visit the gruesome Zindon Prison, home to the infamous Bug Pit. Prisoners would be thrown into the pit and rats, lice, scorpions and other creatures would be dropped on their heads.

Days 10-12 – Exploring Samarkand
On day 10 we explore the striking scenery of the Nurata Hills, and you can opt for a dip in Lake Ajdar Kul. We then drive to the beautiful city of Samarkand, our home for the next three nights. Enjoy a guided tour on day 11 to see the central Registan Square, the Ulug Beg Observatory and the ruins of the Bibi-Khanym Mosque. The mosque was once the jewel in the empire of the warlord Timur, who was born here.

Day 12 is free to explore or join optional activities including an excursion to the ancient city of Shakhrisabz. (B x3)

Days 13-14- – Tashkent
On day 13 we have a free morning in Samarkand before we drive to the final destination of our adventure, the Uzbek capital of Tashkent. Clean and modern, this Soviet style city is a fascinating place to explore and we have two free days in the city. (B x2)

Day 15 – Tashkent
Our tour comes to an end today and you are free to depart for your onward journey.