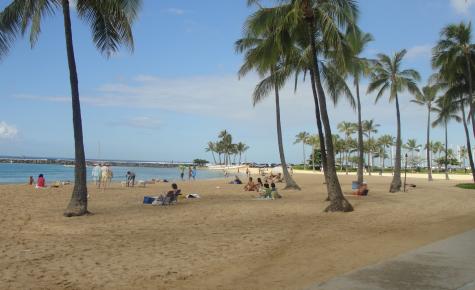 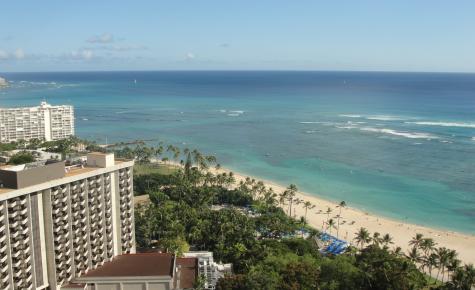 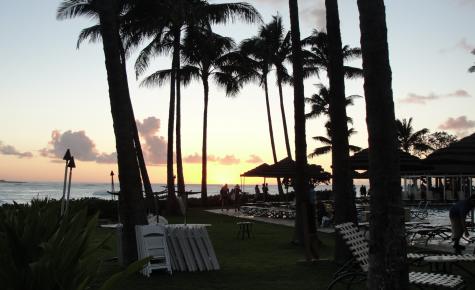 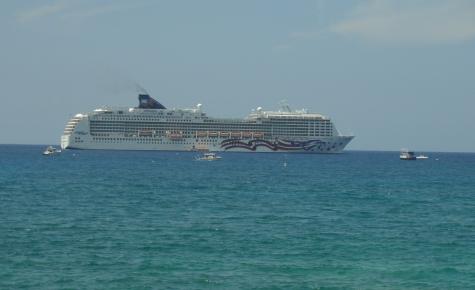 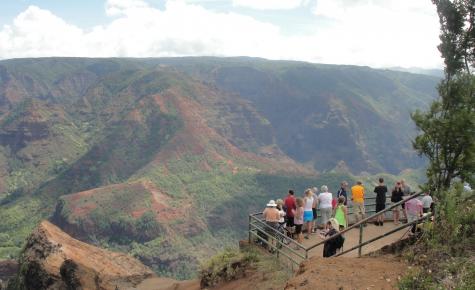 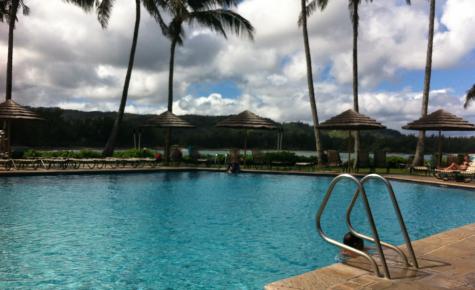 "OK, so you have a week to experience as much of Hawai’i as possible and are travelling with your family – in my case a 9 year old and a 7 year old. How best to tackle this conundrum? Well, … Continue reading →"

Hawaii is certainly very ‘hot’ for Kiwi travellers now – since the introduction of Hawaiian Airlines flights from Auckland in 2013 we have very competitive airfares with two carriers and it’s now become a destination in it’s own right and not just a stopover on the way to or from the mainland USA or Europe. In fact the flights are so busy, there’s currently a $300 surcharge outbound or $600 surcharge inbound with Air NZ to stop off in Honolulu on the way to or back from Europe or the USA!

As your plane begins its descent, you lean forward in your seat, hoping to catch a glimpse of the emerald and iconic volcanic peak known as Diamond Head, rearing out of the ocean and fringed with white sand. The moment you step off the plane you know you’ve arrived in the right place – the air is warm and has that languid feel that you only find in the tropics. Then, as if to reassure you further, you’re greeted, not by the usual nod from a customs official, but with a brilliant smile and a welcoming ‘aloha’. It’s a greeting you’ll hear a hundred times a day in Hawai‘i, and one which you’ll find yourself slipping into your own language as you melt into the rhythm of the islands. Hello, goodbye, peace, love and happiness – all sentiments that suit the Hawaiian lifestyle perfectly. With its Polynesian heritage, it’s easy to imagine that New Zealand would be like this if it had the good fortune to be dragged a few hundred miles closer to the equator.

It’s the sort of destination that makes you want to try new things. Fancy learning to surf? You’ll find a beginner-sized wave somewhere on any given day, and there’s no shortage of patient instructors to get you up and riding. Or learn a new artform or custom from the Islands of Aloha. The friendly Hawaiian locals will be only too happy to share their stories and the strong spiritual connection between Hawai‘i and New Zealand. One thing is certain – on your last night, as you watch the sun sink into the Pacific, you’ll wish you could dally a little longer.

Hawaii’s appeal is that it is big enough to offer a variety of experiences from ‘flop and drop’ beach breaks to active holidays featuring mountain biking, the latest craze of paddle boarding and of course the State sport of surfing! The shopping is great, the beaches legendary and the food pleasingly Polynesian – we hope you like pineapple!

Hawaii’s beaches are legendary – many are picture perfect with white sand and warm water. There are numerous ‘Beach Parks’ with lifeguards on duty and picnic and playgrounds for families adjacent. You must try the Hawaiian spin on snowcones – delicious and refreshing ‘shaved ice’ to cool you down!

When to go – With a beautiful climate all year Hawaii is an anytime destination, it gets a little breezier and cloudier in the winter (Oct-April) – hence the influx of pro surfers! As so much is imported (petrol/power prices in particular are much higher than the US mainland), Hawai’i has never been a cheap US State to visit, but with the current excellent NZ$/US$ exchange rate, it is currently better value than it has been for many years.

Where to stay – this is usually a straight choice between a hotels/resort – with all the usual resort facilities, restaurants and bars, and often beachside OR a ‘condo’ – without restaurants/bars but offering self-catering facilities – laundry/kitchen etc. Condos are great for families as you’ll have more space but you’ll usually need a car for dining or to drive to a nearby beach.

This is the newest of the American States, the 50th and joined in 1959. It’s capital is Honolulu on the island of Oahu. The Islands were visited by Captain Cook twice and were named the Sandwich Isles and this is why even today the Hawaiian flag contains the Union jack in the top corner just like Australia and New Zealand. This is the only US state made up entirely of Islands, there are 8 in total but there’s 4 main islands you might visit – O’ahu, Maui, Kaua’i and the “big island” of Hawaii.

O’ahu – An old-fashioned trolley bus rumbles along streets fringed with palm trees. Beyond lies a white sandy beach where tourists and locals relax. The surf is small but perfectly formed – just right for a morning surfing lesson. Say aloha to tropical breezes, world class shopping, top quality restaurants, history making Pearl Harbour & tantalising cocktails. O‘ahu has much more to offer beyond Honolulu. Hire a car and circle the island. On the east coast you’ll find soaring cliffs, talcum-powder beaches and a quieter way of life, the perfect foil to the fun and frivolity of Waikiki. The world-famous surf beaches of the North Shore are another highlight, and even if you’re not a surfer, Sunset Beach may be the world’s best spot to watch the sun go down.

Your international flight will bring you into the rather tired Honolulu International Airport – resembling a typical Pacific Island airport but on a bigger scale. I think it’s fair to say that it could do with a spruce up. Never mind, it’s not too far from there to downtown Waikiki, the centre of action for holiday-makers. This is where the majority of hotels are concentrated, just near the long stretches of Golden beaches. Waikiki is pretty built up – think Queensland’s Surfers Paradise, and is very popular with Japanese and American holidaymakers. The best way to see everything is the Waikiki Trolley bus.

Must do’s Shoppers should head for the Ala Moana shopping centre, the worlds largest open air shopping centre with over 290 shops. Prices are best on the ground floor!

Families with school age kids might consider a day trip to the Wet’ n’ Wild water park at Kapolei – Ok, this one is a little run down and during out of season some of the rides are on 30 minute rotations, but it’s still great fun and a nice place to cool off!

If you only do one excursion in Oahu it should be to Pearl Harbour & the USS Arizona, a very moving tribute to those who lost their life here on December 7th 1941.

North Shore – resembling a Kiwi ‘bach’ community, this seems like a world away (but only an hour’s drive) from the hustle and bustle Honolulu where the surfers head to, especially in the Winter for the big waves at iconic breaks like the Pipeline, Sunset Beach & Waimea. Every beach up here is spectacular, and this must have the highest quota of beautiful bronzed people on the planet!

Maui  – This laid back island is quintessential Hawai‘i. Small towns and social locals, you can park up solo on a beach with just your towel and your thoughts of what a beautiful place the island of Maui is. Be captivated by the changing landscapes around the island, take in that island air and forget what time of the day it is. In need of a shop? Visit Lahaina for boutique art galleries and outlet shops. While in this quaint town, where whaling ship crews once roamed, enjoy a cocktail while gazing out across the gorgeous blue sea to the neighbouring islands of Lana‘i and Moloka‘i. Get out and explore the beaches though, that’s the main attraction. There are resort laden beaches, long white sand beaches, secluded rocky coves, beaches fronted by parks and picnic areas, beaches for surfing, beaches for sandcastles – you get the picture..

Must do’s – the two places to head for are Lahaina on the West coast and Hana on the East coast.  Lahaina is a pretty little town with many little art galleries and restaurants. Hana is all about the journey – the ‘Road to Hana’ contains 600 hairpins and 54 narrow bridges – marketed as the trip of a lifetime.

Nestled between the 2 towns is Haleakala Volcano National park which covers 75% of the island and the volcano crater is a staggering 11kms across 800m deep. You can drive right to the top of this!

Kau’ai – Ian’s favourite – They call Kaua‘i the ‘Garden Isle’, but it’s like no garden you’ve ever seen before. Its mountaintops trap the rainclouds that roll in off the Pacific, so its peaks and valleys are draped with lush vegetation. Geologically it’s the oldest of the four main islands of Hawai‘i, so it’s had plenty of time to develop some spectacular scenery. Mark Twain described Waimea Canyon as the ‘Grand Canyon of the Pacific’, while another highlight is the Napali Coast, where sheer cliffs rise thousands of feet straight out of the ocean. This coast is only accessible by hiking, boat or helicopter, but it’s well worth the effort. Of course, you don’t have to travel so extravagantly to appreciate Kaua‘i’s wonders – hire a bicycle from Kapa’a and cruise the cycle path that follows the coast for several kilometres. You’ll find your own patch of paradise. It’s the place for active travellers keen to try adventures like Zipline and kayaking. The scenery is spectacular – you can now do ‘Waimea – the Director’s Cut’ tours of the island to visit the many film locations used for Jurassic Park, the Descendants, Raiders of the Lost Ark, South Pacific etc.

Must do’s: Waimea Canyon State Park – the ‘Grand Canyon of the South Pacific’ and if you have the time and budget – a helicopter tour to the extraordinary Na Pali coast – think ‘Jurassic Park’!

‘Hawaii’ – The Big Island –  Also known as the Big Island, there are plenty of wide open spaces here! A tropical climate at sea-level but some peaks will have snow on during winter, it truly is a destination with four seasons in one day! Do not miss the opportunity to see a volcanic landscape – one of many adventures you can partake in here. Volcanoes National Park is one of the few places where you can actually see new land being created as molten lava plunges into the sea. The sudden meeting of hot rock and cool water creates a vast steam cloud that can be seen from miles away, but to see it after dark is even more impressive, glowing red against the black lava field and night sky. If you are on a cruise ship, it will cruise past the coast at night so you can see the lava from Kilauea reaching the ocean. Also check out the west coast where you’ll find Kona, a cute little waterfront town that today is famous for its coffee and World Ironman championship. History wise, Hawai‘i was the last royal residence of King Kamehameha the Great, while at Kealakekua Bay is where Captain Cook first set foot on the island and where he was later killed.

Must do’s : Visit the town of Kona for its famous coffee and learn about the history of King Kamehameha the great who had a run in with Captain cook which ultimately led to Cooks’ death in 1779. If you have time, drive to the summit of Mauna Kea (13,796 ft) for the views and the observatories there.