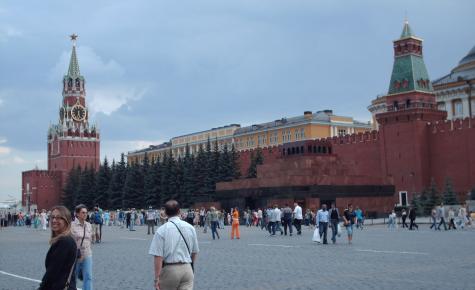 Moscow – it’s all Russian to me!

After 3 visits to Russia I decided it was time to actually learn some Russian.  The words for restaurant and toilet simply weren’t enough!

Moscow is a city of incredible contrasts with more Billionaires than any other city yet you will still see pensioners lined up outside the metro stations selling vegetables and fruit to try and make ends meet. If you think what an 80 year old muscovite has lived through, the great patriotic war, Stalin, communism, the cold war, the collapse of the soviet union, it is little wonder that this generation hanker for the old days when there were jobs and homes for everybody and Russia was a world superpower.

Moscow, named after the river on which it sits is formed around concentric ring roads, most things you will want to see are found within the first ring road which is built around the route of the city walls of the 16th century. St Basils cathedral with it’s colourful onion domes is often the image most associated with Moscow if Not Russia and is found next to the Kremlin in Red Square. Kremlin is the name given to towns fortified stronghold and Moscow’s has been the seat of power since the 1150’s. Things to see are the Arsenal, the Kremlin museum, the Assumption Cathedral and the many other chapels and towers. The first time I visited I saw the Bolshoi perform Swan Lake in the Palace of congress as the Bolshoi was closed for renovation. Outside the walls of the Kremlin are the tombs of the Unknown Soldier and more famously Vladimir Ilych Ulyanov, more commonly known to you and me as Lenin. My other favourite place to visit is Gorky Park, named after the Russian writer maxim Gorky, a great place to visit in both summer and winter. You must also take a trip around the circle line

Shopping – yes I do shop.  The Gum store, opposite the Kremlin on Red square was built in 1888 and is now one of the swankiest Arcades you will visit, no doubt catering for all those billionaires. Novy Arbat is the main shopping street and has some good souvenir stalls, my favourite place for shopping is the Saturday market at Izmailov Park which was part of the 1980 Olympic village, this has everything a local or a tourist would want, from brightly painted Mytroshka Dolls to a rug from the Caucasus and central Asia.

Around Moscow – The so-called Golden ring is a modern name for a loop of towns which preceded Moscow as the cultural and political heart of Russia, the most famous is Suzdal. All are accessible as one or two day trips.