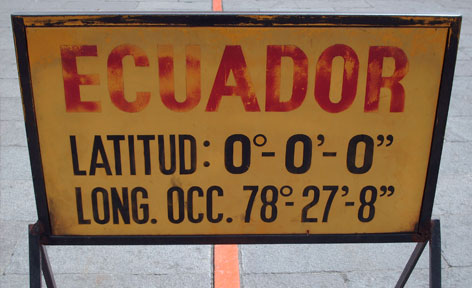 Ecuador – standing astride the equator…

I recently enjoyed an 8 day Peregrine Ecuador Discovered tour which included the colonial town of Quito, the Andes and the lush jungles of the Amazon Basin. It was just a taste of Ecuador but as I have already visited Peru, Brazil and most of Southern South America it was long overdue.

We started our tour in Quito – the capital city of Ecuador and as it sits majestically at 2850mts above sea level there is no rushing around when you first arrive! Its official name is San Francisco de Quito but this somehow managed to get lost. It sits in a valley between the western Andes and the eastern Andes and is nestled on the slopes of the Pinchincha Volcano which last erupted in 1999, showering the capital with several inches of Ash.

Quito has a really big old town and thanks to the Spanish, some lovely old colonial architecture and of course numerous beautiful churches and monasteries, if you visit only one church make sure it is the la Compania de Jesus, a Jesuit church with an absolutely stunning gilded interior. Around Plaza Grande is the Presidents residence and the cathedral and in the centre the independence monument. The cathedral has some very interesting paintings including one of the last supper in which the apostles are feasting on guinea pigs, and a nativity that has a lama peering over the crib. 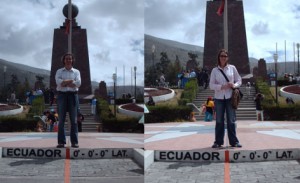 Mitad Del Mundo – As the name of both the country and this attraction suggests, this is the middle of the world, and about 16kms outside of town is the Equator. In 1736 Charles-Marie De la Condamine made the measurements showing this was indeed the Equatorial line and to commemorate this, a 30 metre high stone monument topped with a brass globe attracts both locals and tourists to allow you to get all those photos with 1 foot in the northern hemisphere and 1 foot in the southern hemisphere. Alas though, with the invention of GPS it was found that the equator was actually 240mts away and here is where you find the Museum Solar Inti Nan. This is a great museum with a fabulous Solar Chronometer and all sorts of exhibits and hands on attractions relating to the strange powers of the Equator. This is an incredibly fascinating attraction but for some reason it appeals to the geeky boys than the girls!

After Quito the next stop was the Cotococha Jungle Lodge where we stayed for 2 nights and had jungle walks and a visit to the local Indian community and an animal sanctuary. We visited the beautiful ‘El Pailon del Diablo” waterfalls – loosely translated as the Devil’s Pylon and the we explored the lovely Andean mountain village of Banos – famous for its hot springs.

Returning to Quito we follow the ‘Avenue of Volcanoes’ and come to the magnificent Cotopaxi Volcano where we climb to the refuge for stunning views. Intrepid travellers can arrange to climb Cotopaxi (5900 metres) with a guide. This involves a 4WD that takes you up the slopes of the volcano and then you start the climb at midnight, arrive at the top about 6-7am for sunrise and get back down around 11.00am. You do need to stay a couple of nights before your trek to acclimatise.

Then it was a flight from Quito to Buenos Aires (a favourite city) to eat Steak and buy antiques in San Telmo – an expensive habit that now seems to be an annual event.